Another achievement for our profile 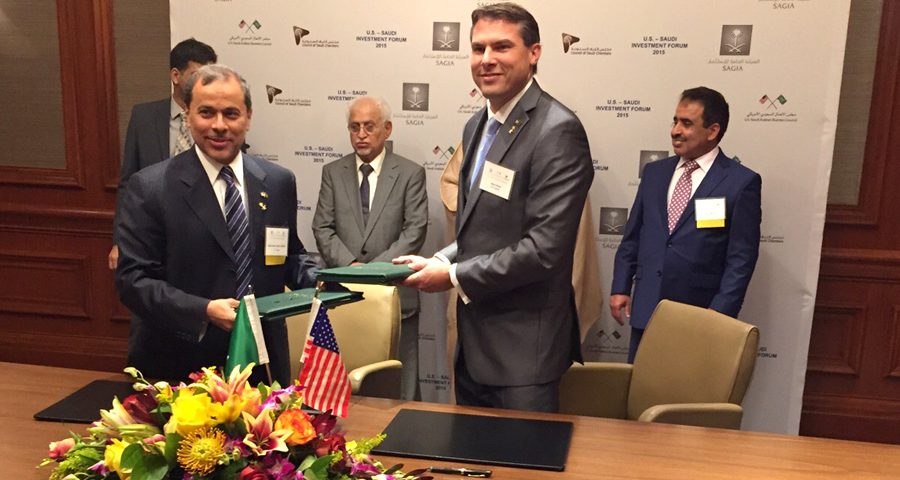 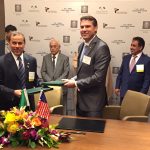 The activities of the Saudi / American Investment Forum organized by the Saudi / American Business Council and the General Authority for Investment has seen and concluded its activities yesterday in Washington, to coincide with the visit of the Custodian of the Two Holy Mosques King Salman bin Abdul-Aziz Al Saud – may God protect him – the United States of America; the signing of the package of agreements and economic partnerships between Saudi companies and establishments and American counterparts.

And enjoyed those conventions with government support to the representatives of private sector companies in both countries and was attended by His Excellency the Governor General Authority for Investment Abdullatif Al-Othman, the commercial attache at the North America just blessed, Council of Saudi Chambers and Chairman Dr. Abdulrahman Al Zamil, and the Saudi / American Abdullah bin Juma, Chairman of the Business Council and a large number of businessmen and women, and was one of the salient features in the activity of the Forum and its activities, which was reflected on the size of the partnerships concluded between the two sides.

Included agreements several areas in the important and vital sectors: health care, pharmacy, industry, tourism, training, housing, employment and other vital sectors of services, most of the terms of the agreements focused on cooperation in the exchange of experiences and transfer of technology to contribute to provide more quality jobs for the workforce Saudi Arabia, are also a boost strong to move from the existing business partnership on the volume of imports and exports to deeper and stronger partnerships and to contribute to the resettlement of investment and the adoption of advanced technology and management methods enhance the competitiveness of the business sector in the Kingdom and its evolution.

Memorandum of Understanding between Inter Health Company has signed and (X 2 Biosystems) of biological systems to cooperate in the treatment of brain injury in the Kingdom to allow the agreement to the company Saudi Arabia to take advantage of advanced electronic sensing devices, biometric that can be worn, and wireless communications, and analysis of cloud data provided by X 2 US company for the control of head injuries and being able to diagnose and monitor potential cases of concussion quickly and accurately. It also includes provision of comprehensive support, and specialist care for people living with concussed, and give athletes the ability to return to action, as well as civilians and industrialists and the military.

Agreement signed between Swift Holding and Sah Global on a number of projects in the field of nuclear medicine, including the establishment of Tsoiraldzeia Center, the Center for proton therapy, as well as the establishment of a training and education center in the field of medicine Alnowi.ooukat Samama company memorandum of cooperation between General Electric International to support the company’s plans in Investment in health fields.

A cooperation agreement between the Al Abdulkarim Holding Group also signed, and diesel and, to lighting the streets of solar Kingdom, including assembly, installation and service systems. This agreement comes in the wake of large orders, including installation of more than 2,000 units Solar Lighting to illuminate more than 60 kilometers on the roads leading to remote production facilities and is committed to agreement creating renewable energy solutions to meet the growing demand for energy, and technology transfer to the Kingdom and to provide better employment opportunities for the labor force.

It was also the signing of the partnership between Horizon Shield and LG Talcic any agreement in the field of aircraft maintenance in the UK, which will help the last Horizon company to develop the project for the maintenance of aircraft components inside the kingdom, and the development of its ability to repair and manufacture of spare parts.

Salehia company also signed a cooperation agreement with the company Omagn a multinational US biopharmaceutical company based in California, the largest independent biotechnology company in the world is. The agreement aims to develop cooperation between the two sides through the introduction of new products in the UK markets.

Also signed memoranda of understanding between the Fund and Antrhilt Mdkab Wellman to help in the development of medical research and investments in the Kingdom.

And it signed a partnership between Al Tayyar Travel Group and Equinox Hospitality agreement, in order to take advantage of the technical and artistic global expertise American company, so as to enhance its ability to take advantage of upcoming opportunities in the hospitality industry candidate for further expansion and growth in the Saudi market. It is expected to begin the emergence of the effect of this partnership project in the pilot group for the development of the city in Mkhalmakramh Zakhr.

A cooperation agreement between Al-Rabiah Consulting Engineers and Michael Baker International, also signed in the field of engineering consultancy to enhance the common experience and the transfer of expertise in the field of infrastructure and provide the foundations of the safety of buildings and facilities.

And it signed a cooperation agreement between the Saudi American Glass Company and technical glass products in the field of the glass industry.

It signed a memorandum of understanding between the Al Bassam Investment Group Inc. Azad Asset Management for the exchange of financial expertise and trade online.

AAC partnership between the Group and the American Enterprise Car Rental in the Kingdom and the region as the agreement was signed.